Saturday I stood a reference counter shift at the Library.

A lady approached me in the afternoon. She told me that she had been here at the library for the past 3 months. Saturday was her last day. She'd found a few things of note during her visit. She had wanted to find out more, but time had run out, she needed to get home.

She told me that she had recently learned to ask people at the reference counter for help. Now that she was going out the door, she asked for my help in evaluating her data and what she should do next.

I was astounded as I began to make suggestions for further study.

During that time she talked with other library patrons, and volunteers, but she didn't bother to approach the paid staff at the reference counters.

She wasn't using a computer to help organize her information, either. We have all the tools on over 200 computers in the Library, and she hadn't tried to use those tools to her advantage. I gave her the information on how to download a free copy of PAF. In the THREE MONTHS she had been here, she could have attended the 8-class course in using that program at least 4 times.

Unfortunately, I find that all too often I am just as blind to the obvious opportunities that stare me in the face.

What am I missing?

Gotta open my eyes.
Posted by Kinseeker at 7:43 AM 1 comment:
Email ThisBlogThis!Share to TwitterShare to FacebookShare to Pinterest

Yesterday she asked, "Do you love me?"

That's it! I knew that I hadn't stated her regular query properly in the last post.

Her follow-up question always catches me flat-footed, emptying my brain of any rational thought. I have to stop and think, trying to put words to my most recent wave of feeling.

You'd think I could plan ahead.

But in this I am always unprepared.

Over 25 years the list has grown long and dusty. Finding new things to love and appreciate about her is a constant pleasure and keeps me alert.

I'm happy that she continues to ask.
Posted by Kinseeker at 7:20 AM No comments:
Email ThisBlogThis!Share to TwitterShare to FacebookShare to Pinterest

She's asked me for years.

I'm sure that some of my answers have become stale, but I always answered honestly, looking to see new ways that she has become important in my life.

We broke up during the first week we dated, because I felt things were "too physical." She's the only girl I've kissed since I returned from my mission so long ago. Three weeks later we began dating again. A few weeks thereafter, I called her Dad to ask permission for her hand in marriage. They showed up on her doorstep two days later.

I can't even begin to enumerate all the reasons I have listed over the years. Some were Great!; others inane; many inspired; all sincerely heartfelt.

The problem I have is that words are just words. They don't stack up against actions. Apparently my actions have always blasted away any words I have stated. Thus, her need for regular feedback.

Last night I arrived home two and a half hours late from work. I hadn't been able to warn her of my impending tardiness. I should have been more attuned to the depth of her hurt.

Midnight tears painted a picture of wounds inflicted, then barely scabbed over, before being ripped open again; scars building over a quarter century. My un-thinking, destructive actions weigh too heavily on the scales against my words and good intentions.

Early on, in my naivete', I figured I would bring joy and happiness into the life of the girl I married. I would be her hero.

All too often I'm just her chump.

She hasn't asked for a while. I figure that she probably doesn't care to know, right now. But here are a few weightless words rolling in my head this morning:

Posted by Kinseeker at 7:35 AM No comments:
Email ThisBlogThis!Share to TwitterShare to FacebookShare to Pinterest

Of course, the day we came home dawned bright and warm, the shirt-sleeve weather we'd expected. 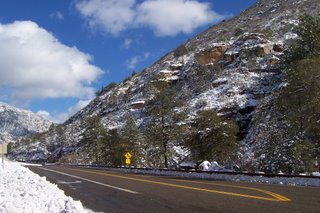 Though we encountered some snow around Kanab, the trip home was pleasant.
Posted by Kinseeker at 9:03 AM 1 comment:
Email ThisBlogThis!Share to TwitterShare to FacebookShare to Pinterest

We thought that we'd take a trip to sunny Arizona. 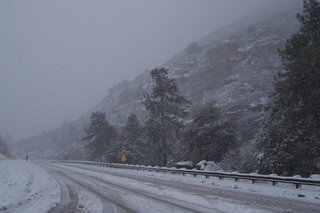 We were surprised.
Posted by Kinseeker at 8:09 AM 2 comments:
Email ThisBlogThis!Share to TwitterShare to FacebookShare to Pinterest

He always walks past me, going the other way: unkempt, dirty, bearded, matted hair, talking to himself.

Two days ago I saw him again. He no longer had the remnants of his old coat with him. It had fallen apart over the past two years or so. Somehow, someone helped him get a new coat. Not that what he was wearing was new, by any means.

I first noticed him about three and a half or four years ago. He was pushing himself in a wheelchair backwards up the sidewalk towards me. I only saw him when I was on my way to the bus stop. I was always in a bit of a time crunch, trying to make my commuter connections.

The spirit always suggested that I give him a push. But he was ALWAYS going the opposite direction than I was and I had a bus to catch.

When I fail to act on impressions the spirit sends me, my life changes.

Every few weeks I would see him, pushing with his good leg, working his way to where ever he was going, steadily, slowly, with concentrated effort. Wind, rain, sleet, slush, snow, he kept on his journey.

As the seasons passed, I noticed that he eventually got crutches. His shoes wore out. His coat became tatters. His progress seemed slower with the crutches than with his one-legged backward pushing of the wheelchair. No longer did I receive promptings to help push him along.

Whatever was wrong with his leg is healed. He is walking, unassisted, now.

He is in a constant state of communication with people I can't see. I am positive that he has never seen me. Always talking, gesturing, eyes focused elsewhere.

Regularly I wonder how I could ever break into his sphere of concentration, to offer him my old over coat, or a new pair of shoes. I've tried to catch his eye with a smile as we pass each other on the sidewalk. He is always focused on things that I'm not seeing.

Salt Lake is a city of compassion. There are folks spread around the city center every day asking for help from passersby. If they ask, they get help: food, coin, folding money, clothes, shelter.

I have never seen him with his hand out. Ever.

My esteem for him has grown over the years: his dogged determination to get where ever it is he goes; his concentration; his focus; his complete and utter disregard of the world around him; his apparent independence.

I wonder what I have missed.
Posted by Kinseeker at 7:05 AM No comments:
Email ThisBlogThis!Share to TwitterShare to FacebookShare to Pinterest

I didn't get a chance to meet my newest niece.

She arrived at 10:40 am yesterday. She left this morning at 5:30 am. My wife, daughter-in-law and grandkids went down yesterday to greet her. I'll get to see her picture in a while.

Though I didn't buy her casket or funeral plot, I have anticipated her arrival.

When my wife and daughter were discussing her imminent arrival last Wednesday, her spirit visited and said, Hi! while she was on her way to enter her destined physical abode. They said her spirit was strong and bright.

I miss her already.

I look forward to the day when we will meet her and experience her celestial glory.

I work steadily to qualify for that experience.
Posted by Kinseeker at 12:16 PM No comments:
Email ThisBlogThis!Share to TwitterShare to FacebookShare to Pinterest

She told me what happened when Silas came over to our apartment the other night.

After I unzipped his coat, Silas took it off and went into our bedroom. He stood in the center of the room for a short space of time, thinking. Suddenly, he turned and went to the closet. The door happened to be open, so he opened the tall jar of candy there and got himself a treat.

Nothing spectacular. Most 19-month-olds probably remember the location of goodie bins from visit to visit at their grandparents.

Silas had a rough night. He wasn't comfortable sleeping at our apartment, apparently. She brought him in, sang him lullabies, rubbed his back and got him to sleep. He woke a few times thereafter, but eventually settled down. 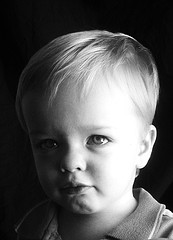 He didn't wake up when I got up for work. But I must've made too much noise after my shower, closing a drawer too loudly, I guess. Anyway, Silas awoke with a start. He rubbed his eyes and rolled out of bed. I was standing in the closet doorway, putting on my shirt.

He looked my way.

To my surprise, he walked past me to the candy storage jar in the closet, pulled-out a tootsie roll, unwrapped it and popped it in his mouth.

We need to keep that closet door closed from now on.
Posted by Kinseeker at 6:07 PM No comments:
Email ThisBlogThis!Share to TwitterShare to FacebookShare to Pinterest

This morning I had breakfast with Silas.

Just him and me at the table together. I had a bowl of Cheerios. He made sure his was a mix of Apple Jacks and Cheerios.

He carefully placed a Jack on his spoon, then lifted it to his mouth. When the Jack fell to his lap, I helped him retrieve it and put it on the table. He promptly decided that the middle-man wasn't needed and put the Jack directly into his mouth.

Silas was over at our apartment because his little brother had a sleep-over of his own going on. The docs wanted to check him for sleep apnia, so he and his mom spent the night at Primary Children's Hospital. They've been giving Gid a full battery of tests since he was diagnosed with Cri du Chat (also known as 5p-minus).

It was fun to have another kid with me at the table this morning before I headed out the door.

This is Gid when he had an EKG a week or so ago.
Posted by Kinseeker at 7:39 AM No comments:
Email ThisBlogThis!Share to TwitterShare to FacebookShare to Pinterest
Newer Posts Older Posts Home
Subscribe to: Posts (Atom)