We made it to the sea-side city of Long Beach with only a short detour through Watts this morning.

The room we found to stay in tonight is only about twice as expensive as the one we stayed in yesterday. That's okay, though. We were happy to get off the marvelously intricate system of highways in this part of the country. Those roads and the lack of mountains to help keep me going in the right direction magnified the feeling that we both experienced: We're not at home anymore.

When we first drove through town, we were unable to spot the regular signs for accommodation. Our return trip helped us to see more. We stopped at a hotel and I asked if they had rooms available. They did, so we checked in. I was only slightly surprised when they informed us of our assigned room: 911.

The last time my wife and I traveled out the country was in September, 2001. We were in Greece, on the island of Rhodes, when we saw the World Trade Center towers struck and fall.

The feelings of ill-ease we felt at that time, were fulfilled.

Those feelings have been masked by my birth certificate stresses.

Still, we're staying in an odd room.
Posted by Kinseeker at 10:24 PM 1 comment:
Email ThisBlogThis!Share to TwitterShare to FacebookShare to Pinterest

Monday morning I had an odd idea.

We'd discussed driving to California for our 25th Anniversary. I thought, "What if we drive down, then get on a cruise ship?"

She thought it was a great idea, too. 25th time's the charm. I finally got the anniversary thing done right.

The internet is a fun place. I found a deal on a Carnival cruise from Long Beach. I learned later that we'd need birth certificates or passports to get on board.

Our birth certificates and passports were stolen last November, so I got on-line and ordered new ones. Pronto.

Her's showed up at our apartment complex the next day before I got home from work.

Mine hasn't shown up yet.

I ordered them the same day. Michigan's bureaucracy must be more efficient than Ohio's.

I have a scanned image of my old one and a copy of my confirmed purchase order. The stress level is high.

Will I get on the boat? Or will we have wasted a good deal of money?

Life is an adventure.

We drove to California today. Her first time to this state. My third. We're in Barstow, checking it out for my sister-in-law, who will be moving her brood down here in August. Poor chica.
Posted by Kinseeker at 9:11 PM No comments:
Email ThisBlogThis!Share to TwitterShare to FacebookShare to Pinterest

I was allowed to type-up her obituary.

Joanne was born Dec. 6, 1942, in Petoskey, Emmet County, Michigan, the daughter of Leslie Eugene Heinz and Donna Joanne Price. She grew up in beautiful Northern Michigan, learning young to exercise her talents. 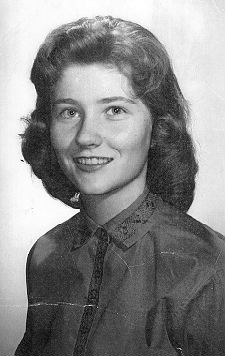 Mom graduated from Harbor Springs High School, a member of the class of 1960. As a teenager, she was the organist and pianist for several Presbyterian congregations in the area around Little Traverse Bay.

Joanne married Arnold Leroy Howse on Sept. 18, 1959, in Harbor Springs. They were sealed in the Salt Lake Temple on June 15, 1965. Together, they raised a family of 12 children.

As their family grew, Arnold and Joanne worked at Crump's Candies in Harbor Springs, eventually acquiring the business and renaming it Howse's Candy Haus. They successfully introduced Northern Michigan-style fudge in Boca Raton, Fla., and in Provo and Park City, Utah. 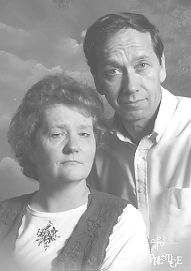 Joanne met missionaries of the Church of Jesus Christ of Latter-day Saints and embraced their teachings when she was a young mother. She and Arnold provided a place for the first LDS Sunday school in Northern Michigan and supplied roots for the establishment of the church in Northern Michigan. Mom has been actively engaged in church work, serving in the Primary, Young Women's and Relief Society organizations. She actively traced her family history, taking her family on trips around the country in pursuit of grave stones and other records of her past.

Joanne was preceded in death by her father, and, a month ago, by her granddaughter, Christina Shell Howse.

The funeral service will be held at 1 p.m. Friday, April 21, at the Park 6th Ward Chapel on 4th West in Orem, Utah. A viewing will precede the funeral at 11:30 a.m. Arrangements are being made by Sundburg-Olpin Mortuary, 495 South State St., Orem, Utah 84058. Interment will be in the Orem City Cemetery.

Condolences may be sent to the family at www.sundbergolpinmortuary.com.
Posted by Kinseeker at 2:36 PM 1 comment:
Email ThisBlogThis!Share to TwitterShare to FacebookShare to Pinterest

Blood enzyme levels indicate that she also had a heart-attack at the same time. Her diabetic sores have become infected and gangrene has begun to spread. In her situation, amputation is no longer an option.

Her german roots include a tendency for stubborn persistence. She's waiting for her oldest daughter to get home.

She has had a remarkable life. She bore twelve children and brought them up to be successful, thoughtful and compasionate. 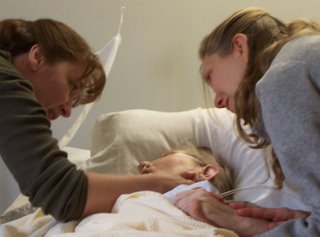 Mom and two of her daughters

The Hospital staff has been very considerate. Only a portion of her posterity is ever in the room at any given time, but it can become a circus very easily.

The last two daughters will arrive tonight. Another son is waiting for further word before he makes any travel plans.

Patience is a virtue.

Last Monday the doctor removed Gideon's arm restraints and the brace over his lip.

His next surgery is scheduled on July 11th, a day before his big brother's second birthday. They'll begin work on his soft palate, then. It'll be a three-day hospital stay.
Before 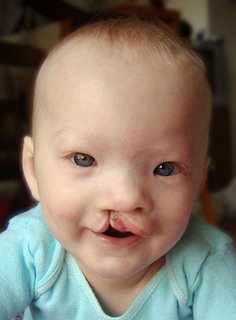 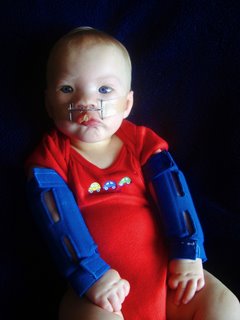 Released from his bonds 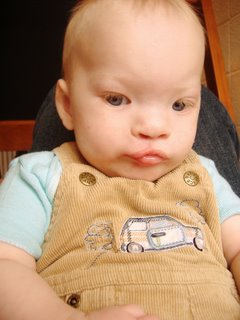 At seven months, he is definitely my hero.

Posted by Kinseeker at 7:22 AM No comments:
Email ThisBlogThis!Share to TwitterShare to FacebookShare to Pinterest

Silas was at our house when I got home from work on Monday. His mother was experimenting with hair color, so we kept him out from under her feet for a while.

When it got time for us to return him, we told him we had to go Bye-Bye.

Silas stooped down by our small bookcase, picked-up the ceramic squirrel that lives there, and gave it a kiss.

We got the squirrel several years ago when her grandmother passed away. It has sat on different shelves of our small bookcase ever since then. 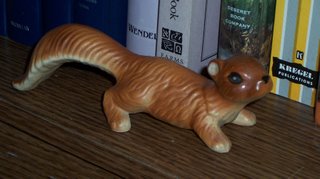 Silas has been attracted to the squirrel since he could crawl.

I've only had to glue it together once.

Silas has been giving us good-bye kisses for about a couple months now, I suppose.

When I mentioned for her to look at our grandson, Silas said, "Bye", stooped down, picked-up the squirrel and again gave it a kiss.

I guess that's as much as he can do since we had the cat move away.
Posted by Kinseeker at 7:06 AM No comments:
Email ThisBlogThis!Share to TwitterShare to FacebookShare to Pinterest

With the sale of our home finalized, we have been able to stabilize our finances somewhat.

That stabilization has opened new opportunities, as well.

She had been limping along with an old iMac we purchased before the turn of the century. The old system hardly was able to display most internet information. She had to install Netscape and use two browsers just to navigate at times. The old machine only had six gigs of space and the processor was SLOW. The old Blueberry iMac has performed for well over seven years. I figure our costs have been fully amortized.

With our new financial situation we were able to bring her computing into the 21st century.

We went down to the new Mac Store at the Gateway last Thursday and bought a Mac Mini with a super drive. We purchased a 19 inch flat panel monitor at CompUSA. We bought Bose speakers at Circuit City the next day. All together it cost less than the first MacPlus we bought back in 1988. The differences are astounding.

We're both just a little hesitant with the new Mac OS X. I have become accustomed to being able to worry about and manipulate directory structures. This system seems to allow you to forget about all that. It's a bit of a paradigm shift.

Of course, since it is her computer, I only have to offer tech support, very rarely will I have opportunity to use this fun new machine. I do want to experiment with iPhoto and iDVD, though. We'll see what happens.

I am posting from her desk while she's in bed, listening to Paul Simon's Graceland on iTunes.

Friday night we used it as a mini-entertainment center to watch a DVD.